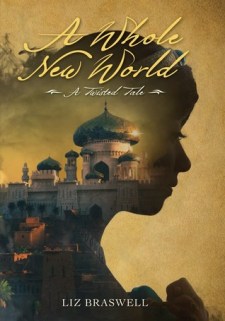 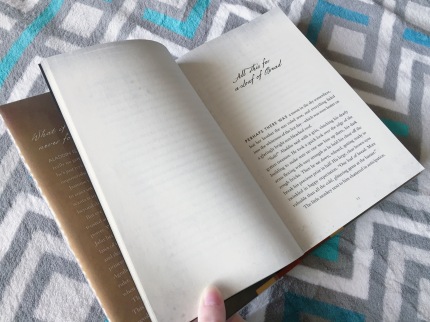 Before I get to the review, I’ll leave you with this very important, relevant video.

I have to say, A Whole New World is one of the most unique retellings I’ve ever read. It starts with a sweet prologue not included in the Disney movie, and tells a much darker story, but I could still detect hints of the classic I grew up with throughout. I was hooked instantaneously, and I know I would’ve devoured it in a day or two if not for school. 😉

The trilogy is called Twisted Tales for a reason: one crucial detail in each story is changed. In this book, Jafar got the lamp first and used it to take over as sultan and become the most powerful sorcerer in the world. (Sound familiar?) Then he starts taking things way too far, and Aladdin and Jasmine must organize a revolution against him. It’s just as cool as it sounds, and just as wild. 😀

After finishing the book I was scrolling through friend and community reviews on Goodreads, out of sheer curiosity. I saw a lot of negative reviews, and due to time really only skimmed them. A common complaint was that there was little connection to the Disney version, and while I completely respect others’ opinions, I wanted to say my part. I think that a retelling should have basic points of the original story included, but should mainly be its own story. If it were too similar, there would be little or no engaging elements left in the story. I thought there were plenty of connections to the movie in the beginning and a few later on, but there was still a totally new plot. 🙂

The characters were exactly the way I remember. Aladdin was a resourceful, clever protagonist, and Jasmine was your normal sweet, kind princess, but very strategic as well. Jafar was the same evil  man I know and despise, and Genie was probably my favorite character. He wasn’t as major of a character as I imagined he’d be, but when he was around his humor was just wonderful. His nicknames for Jafar had me laughing out loud, and I’m not even exaggerating. However, he definitely carried more of an emotional burden than he did in the movie, and I think that was appropriate. I basically loved all the characters (except Jafar), but my favorites were Jasmine and Genie. Well, actually, Rajah and Abu. You have to love the furry sidekicks.* 😉

There were new characters as well, mainly two of Aladdin’s childhood friends: Morgiana and Duban. They were both great, and I liked that they were more than just the mischievous children they were in the prologue. There were a lot of other street rats that played a part, but not all of them were given names, and I couldn’t list them all anyway.**

** Remember in the movie, when Aladdin and Abu give the bread they stole to the two little siblings? Those two are in this book!

Agrabah was very two-sided in this book: the well-to-do side, and the poor side. It was both a vibrant desert city and a shadowy ruin, depending on your social status. However, beyond this, it was much darker due to Jafar’s rule. Torture, ghouls, and other terrible things are included in the story, which adds to the intensity and the need for the revolution to be successful. Also, did I mention dark magic? There’s a lot of that, too.

We all know that a) Aladdin and Jasmine are cute together, and b) revolutions can make any two (or more) people fall in love. I would say that they’re my new favorite fictional couple, but honestly I’ve been shipping them since I was four or five and just didn’t know it. XD

All I’ll say about the end is this: the street rats’ plan is crazy and clever, and I think it ended on a good note. I mean, one character went briefly insane and another’s arc went much farther than I wanted, but it was good nonetheless. The epilogue was satisfying, and that last page was just so cute. It was very nearly a perfect ending, so it still had that fairytale quality to it.*** 🙂

*** Yes, it’s a trilogy, but the other two books are twisted tales of other stories. It’s sort of like Anna and the French Kiss, where there are multiple books but each one follows different characters with different goals / plots.

All in all, A Whole New World was a very satisfying, fast-paced retelling, and it’s one of my new favorites. I don’t think I’ve read an Aladdin retelling before, and reading this has given me the urge to find more and binge-watch all three Disney movies. I’ll definitely be thinking about this for a while, and continuing the trilogy for sure! 😉

You know an Aladdin gif had to be in here somewhere.

I would recommend this to you if you like Aladdin! 🙂

Have you read this book? Is it on your TBR? If you have read it, what did you think? I’d love to know! Tell me in the comments! 🙂

I’m off to read a bit more of The Forbidden Wish by Jessica Khoury (or scroll Twitter) before bed. 😛 I hope you all have a fabulous day/night! ❤