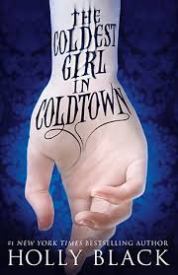 Aside from The Iron Trial, which she co-wrote with Cassandra Clare, I’ve never read any of Holly’s books. The Coldest Girl in Coldtown was my introduction to her, and unfortunately, I was slightly disappointed. After five days I was only halfway through and had no real motivation to finish it, so I DNF’d it 276 pages in. 😐

I was originally interested in this book because it had an intriguing premise that sounded like a great new take on vampires. The concept, once explained, turned out to be exactly what I’d hoped. Everything else, however, didn’t. The execution of the concept I’d loved was only average. I couldn’t bring myself to be overly interested in what happened to the characters, or where the story went next. 😐

There were a fair amount of characters, but I didn’t really care about them. They all came off as just average. Tana was the emotional teen girl that wanted to do what was right but didn’t know how. Aidan was the charismatic ex-boyfriend turned bad. Gavriel was the mysterious, charming, inhuman boy with a terrible secret. Midnight and Winter were the loyal twin siblings that were obsessed with what they shouldn’t want but do anyway. They weren’t terrible, but they weren’t great either. They were just average. I would say more, but I don’t want to be harsh and I think this gets my point across. 😐

This book took place in the modern United States, but tweaked. There were Coldtowns throughout the country, where vampires, people infected with the disease, and citizens that were in the wrong place at the wrong time live. I liked the concept of Coldtowns because I’d never heard of it before and it was another way to put a cool spin on vampires. They were described well, and painted in my mind as dangerous, rundown suburban towns with hints of gruesome elegance if you went to the right place. I did enjoy the on-edge vibes given by Coldtowns and the residents, and if I’m honest I think they were the redeeming point of this book. 🙂

There weren’t really any relationships in this book. Tana, her younger sister Pearl, and their father weren’t a very tight family. Tana and her friend Pauline weren’t together enough for me to really decide. Tana and Aidan were in a rocky relationship prior to the start of the story, and a similar vibe stayed between them even after they broke up. Tana and Gavriel had the potential to have a good forbidden romance type of relationship, but I wasn’t interested enough to see if it worked out between them. I liked what I saw of Midnight and Winter’s sibling friendship, but I also think that they should’ve listened to each other more than they did. 😐

Up to the point I got to, there were two things that would be considered twists. I didn’t see either of them coming, but neither fazed me. I’m not sure what else there is to be said. 😐

The Coldest Girl in Coldtown put a unique spin on vampires and had a setting I enjoyed, but otherwise it was disappointing. Unfortunately, I think Holly Black’s books just aren’t for me. 😦

Note: I wasn’t trying to be harsh in any way, and I would still recommend this to you if you’re interested. You might like it, even if I didn’t. 😉

I’m a little bit into Unspoken by Sarah Rees Brennan, so I’ll be continuing that. My March wrap-up and haul should be up tomorrow. 😀

4 thoughts on “The Coldest Girl in Coldtown – Review”