Shades of Earth by Beth Revis
Book 3 in the Across The Universe trilogy
Genre: YA sci-fi (science fiction)
Pages: 369
Format: hardback, library 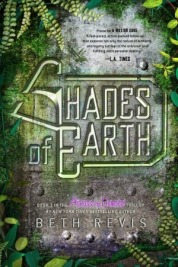 This was an intense, awesome conclusion to the Across The Universe trilogy! I only had a couple of small issues. 🙂

It wasn’t super fast-paced, but it was still very strong and detailed. Nonetheless, there was never a dull moment. I was hooked from the beginning, and there were several times I was confused (in a good way) and had to know what happened next.

Amy was so amazing in this book. She was really tough even after everything she went through and I really admired that. She stood up for herself, her family and friends, and her beliefs. She was curious and open-minded, and also very logical in most situations. I think my only problem with her was that sometimes her feelings for Elder clouded her judgement, but that was minor. On the plus side, though, she was determined to help and be on the front lines whenever she could. I admired that too. Overall she was just a really strong, well-written lead. 😀

Elder was great too. He resembled Amy in a few ways – staying tough, standing up for himself, his beliefs, and the shipborns – but he was still very different (which is good). He was very stubborn, and while I admire that in many characters, there were a couple of situations where I thought he was a bit too stubborn. His worries were very realistic and well done, except on the matter of Amy. He seemed too defensive of her, and, while this doesn’t qualify as a worry, he seemed to get way too distracted by thoughts of her. I admired the lengths he went to for his people, and that he never thought he was above them.

It would be wrong of me to ask my people to work without working myself.

I could mention Chris, but I don’t want to dance around spoilers. Moving on! 😉

I had mixed feelings about Amy’s parents. Amy’s mom was awesome. She was a dedicated scientist and a loving, caring mother. She valued Amy’s help with her work, rather than trying to exclude her “for safety” or because “it’s too difficult”. I love parents like that in books, especially in sci-fi/fantasy/dystopian settings. However, I didn’t like Amy’s dad nearly as much. He was stubborn (like Elder) and seemed to care more about his mission than his daughter. He shot down Amy’s pleas to help him nearly all the time, and while I can understand being protective (especially on a new planet), I feel like he went a bit over the line. He redeemed himself in the end though, when he really showed his soft, fatherly side. But, I have to say, there was one thing I didn’t like about either of Amy’s parents. Neither one of them ever seemed to really like Elder or any of the shipborns because they were different. That kind of irritated me, if I’m honest.

Centauri-Earth was described brilliantly. I could picture everything vibrantly, which is especially impressive for a totally different planet. I loved the way it was seemed to be so similar to Earth and yet so not.

He’s right – the purple Spanish-moss-like plants that clung to the trees are the same shade as the flower petals, a delicate lilac on the edges that sinks to deep purple in the center. A few tendrils of the moss haven’t blossomed, but most have unraveled, twirling into paper-thin, almost-translucent flowers.

Even though they have mind-numbing toxins (not a spoiler, it’s literally on the dust jacket synopsis), the flowers sound beautiful. The whole planet does. I wouldn’t mind living there, after the threats were eliminated. Seriously. 😀

I liked the familial relationship in this book, although like I said previously, I did have a couple of issues with it. Amy’s mom was a great, loving mom, and Amy’s dad exhibited similar traits, although he sort of held off until the very end. So mainly, my problems are with Amy’s dad. I don’t want to ramble, though, so I’ll just leave it at that.

I really liked Amy and Elder’s romance. It was sweet and passionate and they fit each other. For a while I was worried there would be a love triangle between Amy, Elder, and Chris, but I didn’t have to worry. Amy clearly liked Elder too much to develop a relationship with Chris . XD

There were a lot of twists throughout this book. They didn’t really start showing up until around chapter eleven or so, but once they did, it was a fairly wild ride. I was worried for everyone and needed to know what happened next. There were so many times I was confused, and I mean that in the best possible way. The last ¼ was especially intense, with everything about the aliens and hybrids (although that’s all I’ll say 😉 ). And oh my God, that ending was crazy! I was slightly panicking while I read, and it made me feel terrible for Amy. Everything worked out though, and I was relieved for that.

I wish there had been a bit more to the ending. It was really good and wrapped things up well, but I wanted an epilogue. What was the colony like after a few months? What happened between Amy and Elder? How did Amy adapt? I would’ve liked to know the answers to the questions, and just get a little bit more closure.

I really enjoyed Shades of Earth, but I thought Amy’s dad and Elder were a bit too protective and stubborn, and the ending left a bit to be desired. Nonetheless, the trilogy was wrapped up nicely, and is definitely one of my new sci-fi favorites. 😀

Have you read this book, or any of this trilogy? Is it on your TBR? If you have read it, what did you think? I’d love to know! 🙂

I’ll be starting Opposition by Jennifer L. Armentrout next! I also hope to finally finish Redwall this weekend. 🙂

6 thoughts on “Shades of Earth – Review”