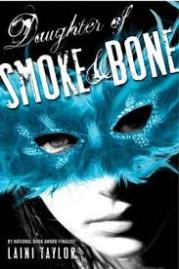 Wow. This book was amazing, and is a new favorite for sure! I totally get why everyone loves it now, and I really should’ve read it sooner. I can’t believe I walked by it at Barnes & Noble so many times! I’m mentally smacking myself right now. XD

The basic idea of the plot is fairly common in my opinion, but Laini put an awesome spin on it and executed it brilliantly. There was a sense of mystery and a smaller sense of humor mixed in to spice it up, and both really benefited the story. I thought the teeth were also an interesting spin on everything.

I loved all the characters in this book a lot, and while I couldn’t really relate to them most of the time, I could on occasion and I was okay with that much. They were just so amazing and I couldn’t use that as an excuse to not like them. I mean, I think connecting with angels and monsters at war would be a bit difficult for anyone (meant in the best way). XD Karou was an epic and unique main character. I love her name- it’s pretty and really uncommon, and the meaning suits her well. I also love that she has blue hair (how many heroines can say that?!) and is so passionate about art (she has almost 100 full sketchbooks!). She has a great way of describing things and a unique perspective, and as weird as this might sound, I loved the way she described the emptiness she felt. I thought Zuzana was a fabulous side character and friend to Karou. She’s quite literally “tiny, but mighty” and I really liked that. She was into puppetry the way Karou was to art, and a bit of a romantic. What I think I liked the most about her was that she stuck with Karou even after finding out about Karou’s errands and, basically, second life. She was so supportive, and I’d love to have her as my friend. Karou too, for that matter. 😀 Then there’s Akiva, the other main character. I love Akiva. I was neutral about him when he was introduced, and then after Karou met and got to know him, I liked him a lot more. He typically gives off a moody, tortured soldier sort of vibe, but when he’s around Karou he gets something I can only think to call an alpha attitude. He’s really protective of her and really sweet most of the time. Honestly, he reminded me a bit of Rowan from the Throne of Glass series. XD

This book was set mainly in Prague, and I thought it was really interesting to explore because I’d never read a book set there before. I didn’t know much about Prague prior to reading, but after I can say that I’ve learned a fair amount. Laini wrote this setting very well, and the others as well. Karou’s errands take her around different parts of Europe and Northern Africa, which, again, I haven’t really read about before. These places also seemed very realistic and I got nice hints of the cultures of these different areas. A few sections of the book also took place in a made-up world simply called Elsewhere, though its true name is later revealed (if I understood correctly). Images of this world were painted in my head as I read, even though not much of the story actually took place here. I suspect I’ll see more of it in the sequel.

There were two relationships that stuck out to me in this book, one romantic and one not, and I really liked both of them. There was romance between Karou and Akiva, and although it wasn’t instantaneous, I feel like it was sort of close to that. However, I’m completely okay with that because it makes sense later on, after a big twist has been revealed. The friendship, like I mentioned previously, was between Karou and Zuzana, and it was a really strong, admirable friendship. It’s one of those bonds that you wish for in your own life, and I did, too. I liked that Zuzana, although she was a side character, didn’t disappear from Karou’s life after the fantastical side came into play. That happens often in fantasy books, so this was a nice change. 🙂

There was only one thing I considered to be a twist in this book, but I’m fine with that. It was pretty significant, and effected the entire second half of the book, including Karou and Akiva’s romance. The funny part is, I actually guessed the twist earlier on while reading but then dismissed it because it didn’t seem plausible. XD There were two other fairly big reveals that surprised me, one involving Brimstone and the other involving Karou’s, let’s say, adoptive family. 😉 The former cleared a lot up for me and made a lot of sense. Akiva had a hand in the latter, and it was kind of heartbreaking. I hope he can make it up to Karou in the second book, because I really like them together.

Daughter of Smoke and Bone was a fantastic fantasy (hehe) and I enjoyed every bit of it. I look very forward to adventuring more in Elsewhere in Days of Blood and Starlight, which I’ll hopefully get when I go to the library next. 😀

I’ll be reading If I Stay by Gayle Forman next, and if everything goes as planned, my review will be up tomorrow! 😀

Have you read Daughter of Smoke and Bone? Is it on your TBR? If you have read it, what did you think? Feel free to let me know in the comments! 🙂

Until next time- Olivia ❤

6 thoughts on “Daughter of Smoke and Bone – Review”