The Kiss of Deception by Mary E. Pearson
Book 1 in The Remnant Chronicles
Genre: YA fantasy
Pages: 486 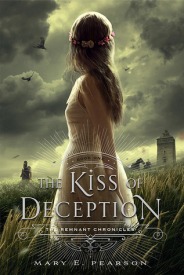 I’ve seen this book (and the sequel) all over Instagram, so I was excited to give it a shot. I’m glad I did, because it was awesome. 😀

It was intricate and fast-paced. Several aspects were connected smoothly throughout the story, and we got into the action after only two or three chapters, when Lia and Pauline flee. After their arrival in Terravin, it got sort of slow for a while. There were nice filler events, but it didn’t start to pick up again until Kaden and Rafe showed up.

There was a multitude of characters, main and side alike, and they were all good in their own way. I really liked Lia, the main character, because she was the opposite of a stereotypical princess. She wasn’t spoiled or whiny, and she had the courage to run and make her own future, rather than accept the one set for her. I admired that, and Pauline’s role in everything as well. She’s Lia’s best friend, and was also her maid of sorts. She readily accepted and went along with Lia’s escape plan, despite knowing that any consequences they might get would affect her more due to her lack of royal status. That’s a real friend. I felt bad for Pauline after the truth about her fiancée was revealed and cheered inwardly when she overcame it; I have a feeling he might show up later, but I really hope he doesn’t. Kaden and Rafe were mysterious leads, with one being a prince and the other an assassin, respectively. They were both really strong and likable, and what I liked most was that Mary kept who was who hidden until a major plot twist halfway through the book. I won’t say specifically because I don’t want to spoil anything, but I will say that I thought their roles were switched and the big reveal surprised me. But after that, I came to despise the assassin. He was still a strong character; I just didn’t like him.

The story took place in a variety of locations across this made-up world, and they were all super easy to imagine. Civica was a large, fairly plain city, and Lia’s hometown. I pictured it with a lot of cobblestone and dreary colors, with the citadelle in the distance, as a backdrop of sorts. Terravin was the small, colorful village Lia and Pauline ran to, and I have to say it was my favorite location. I wouldn’t mind living there. I also really liked the description of the vagabond camp. It was colorful also, and mismatched and quirky. It was the only inviting stop on the long trip that followed the plot twist. Otherwise, it all took place in the wilderness; dry savannas, temple ruins, and the occasional freaky forest. While I only found a couple of these settings desirable, I thought they were all very realistic and well-described. 😉

There was a love triangle between Lia, Kaden, and Rafe, but it was great. It didn’t annoy me at all. Honestly, I liked it. It was greatly done, and it kept me on my toes. In the very beginning I preferred Rafe, then Kaden, and then after the big twist/reveal, I stood firmly with Rafe. I hope Lia and Rafe can work something out, especially after that ending. I also really admired the bond Lia and Pauline had. They were dedicated friends, and they stuck up for each other.

There really weren’t any twists except for the major one halfway through, but I was okay with that. I see now that everything prior was leading up to that, and then there were the effects of it. I was rooting for Lia the whole way through, and by the end, I really hoped Rafe was okay too. I’m worried for both of them and Pauline as well, because her plan is risky, especially given the state she’s in.

other aspects I liked

I thought the very beginning was interesting. The story starts while Lia is getting her kavah, which from what I picked up is a temporary tattoo girls got on their backs before their wedding. It was more extravagant for Lia because she was a princess, and I thought it was very unique. I’m a bit curious why part of it didn’t come off, though. Was it because of Lia’s discovery at the end? That’s most likely, but I’m not positive.

I wouldn’t say that I didn’t like it, but I want to mention the very end. It wrapped up the book nicely but still left questions unanswered and made me want to pick up the sequel. My only issue is that there was no shock factor in it, and that’s because I accidentally spoiled the ending for myself while writing my library book haul. I realize it’s my own fault, but I can’t give a five-star rating when something like this occurs. In my defense, though, I had a slight idea of how the book would end several chapters prior; I had spoiled what did happen, but not how it happened. I predicted that much.

The Kiss of Deception was a very enjoyable fantasy read, despite my mishap with it. I’ll definitely be searching for The Heart of Betrayal next time I visit my library. 😀

So I’m going to use this review format from now on. I hope you guys like it. 🙂

I’m off to start Siege and Storm! 😀

Until next time- Olivia ❤

7 thoughts on “The Kiss of Deception – Review”